It’s the classic rags-to-riches story: But he was the rags, and then worked tirelessly to find IU students the riches.

The birth of the Little 500 race is perhaps as charming as its own storybook legacy: Howdy Wilcox Jr., the race’s founder, “happened upon an informal bicycle race,” per the IU Student Foundation website, on a fall day in 1950 somewhere near Hickory Hall — a historic 10th Street dorm facility now included with the modern, sparkling Union Street Center group.

There are no photographs from Howdy’s fateful stroll through campus that day, but any graduate of IU might be apt to tell you of its majesty: A crisp afternoon amid colorful foliage, crunching under the steel wheels of students’ Schwinn cruiser bikes, perhaps on their way to Kirkwood Avenue, or to read by the Jordan River.

It was the sublime chance encounter necessary to stoke IU’s signature student event.

Howdy, then president of the general IU Foundation, had been urging legendary IU President Herman B Wells to take action on behalf the students to assist their financial situations.

“The IU Foundation simply had no identity on campus, neither with the students nor the faculty,” Howdy said, according to the IU Student Foundation website. “I wrote a letter to President (Herman B) Wells recommending that we form a Student Foundation Committee and charge that committee with spreading the word.”

Howdy himself was the scion of an Indianapolis 500 race winner. His father, Howdy Wilcox Sr., a Crawfordsville native, had quickly become a legend of the “Greatest Spectacle in Racing.” The 500-mile feature was first raced on its gravel-and-tar test track in 1911. Wilcox Sr. would claim the pole position in 1915 and take home the checkered flag (and a cool $20,000) in 1919.

Wilcox Sr.’s days of excellence were short-lived, though. After five top-10 finishes from the 1911 to 1923 Indy 500 races, Wilcox, Sr. would die in a crash at Tipton, Pennsylvania’s dangerous Altoona Speedway board track circuit on Sept. 4, 1923, in its first year. 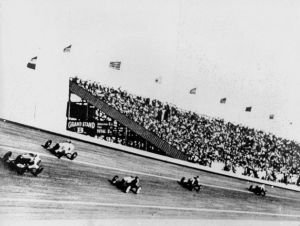 Altoona was closed forever in 1931.

At the time of Wilcox, Sr.’s death, young Howdy was only three years old. The crash left him an orphan, per his Flanner and Buchanan obituary, as his mother died two years earlier.

The young, shaken Howdy was taken in by his grandmother, and he eventually set his sights on school at Indiana University in Bloomington.

After such a tumultuous childhood, it’s not unimaginable to guess that the rigors of orphanage and living in the shadow of a racing legend shaped Howdy’s demeanor, and perhaps fostered his desire to help others in need.

Per his co-worker, Bob Gildea, in Howdy’s 2002 obituary (per Flanner and Buchanan, again), “Howdy would always dig into his wallet for a five or even a ten,” when panhandlers approached him.

He was “plain-spoken and did not suffer fools,” said Donald Davidson, an Indianapolis Motor Speedway historian. “He was military in approach. He wasn’t much for pussy-footing.”

So when the 30-year-old alum and Alpha Tau Omega member went knocking on Herman B Wells’ door, it may not have required much convincing of Wells to join Howdy’s honest, altruistic ways.

Two concepts then took hold: an IU Student Foundation, specially focused on working Hoosier scholars, and an event to fund it — a bicycle race.

Built in the shadow of a legend

The first Little 500 bike race, a tribute of sorts to the 500-miler Howdy’s father helped shape three decades before, was held the next spring in 1951. It carried on many of the same traditional, signature motifs the Indianapolis 500 held as holy: a 3-by-11 starting grid, a 200-lap feature, and enough pageantry to flatter a king.

It’s not hard to imagine Wilcox, perhaps with his hands on his hips, walking quietly around the original track of Memorial Stadium (later renamed Tenth Street Stadium when IU’s current football home was built) on May 12, 1951, before the very first race — pacing the facility and thinking of his late father.

The South Hall Buccaneers of Collins (now Collins LLC) — the only team to train in organized fashion, legend has it — took home the first checkered flag by more than a mile. The dorm still has a team today, though all of today’s competing teams train with regularity.

Approximately 7,000 students witnessed the Buccaneers’ victory, per the IU Student Foundation website, and raised around $6,000 for student scholarships. Today, $6,000 covers less than one-third of an in-state student’s anticipated costs for one year of school before financial aid, but that figure was big money in 1950:

Wholesome money from the mind of a caring man.

For perspective’s sake, Howdy’s creation came sandwiched between some other major milestones of the IU Bloomington campus: The IU Press would be founded in 1950, women would be admitted into the Indiana Memorial Union for the first time in 1952, and the men’s basketball team would take home its second national title with a win over Kansas in 1953.

Since then, each IU staple has grown into its own legacy. The IU Press is now a scholarly publishing house for international authors and award-winning writers, the Indiana Memorial Union grew to include standard admission for every student within their IU tuition and expand to a titanic size, and the men’s basketball team would claim three more titles under storied coach Bobby Knight.

But as for Howdy’s race creation? It would get its own treatment.

Now 63 years later, the campus is gearing up for the 2014 Little 500 races, and Wilcox might be star-struck if he were alive to see them today, between the concerts, popular student involvement, and cameos from maligned cyclist legend Lance Armstrong in 1997 (two years before any Tour de France wins — and decades before any title vacation) and eventual President Barack Obama during an unannounced campaign stop in 2008.

Howdy himself might blush and say “thank you”  if he saw such spectacle today — he was merely inspired by the students themselves on that fateful 1950 campus stroll. It was their race, not his — he just happened to be a mere observer on that day, just like the thousands who now regularly cram into Bill Armstrong Stadium for the men’s and women’s races each April.

Howdy Wilcox Jr. died in 2002 at age 82, just two years after his campus companion Wells passed away in 2000. Per Wilcox’s obituary, contributions in his honor were to be made right back to that same IU Student Foundation. To date, more than $1 million has gone back to students through the foundation.

The Little 500 spectacle has blossomed into its own set of traditions, including a dedication to helping the working student through the IU Student Foundation, but this writer can’t help but suggest adding one more to the mix:

When you see a bicyclist in Bloomington, whether it be on the street or minutes before the big race…say “howdy.”

Jeff LaFave is a 2013 graduate of Indiana University Bloomington and a full-time columnist who still lives on East 10th Street. You can email him at jlafave@indiana.edu.