It had all the makings for a sprint finish.

After teams exchanged the lead all afternoon and a group of 10 teams were in contention for the title midway through the Little 500, the field whittled down to seven with two laps to go. 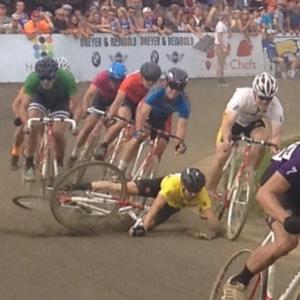 Black Key Bulls, Sigma Phi Epsilon, Phi Delta Theta, Delta Tau Delta, Beta Theta Pi, Cutters and Sigma Chi had escaped the field and had formed a small peloton. They were preparing for a sprint finish. It was lap 199.

As they rounded turn three, though, Beta Theta Pi’s Chris Craig slid out. The crash took out six of the seven competing teams. Only Black Key Bulls escaped unharmed.

And after one lap under a yellow flag, Black Key Bulls was able to race the final lap unthreatened, crossing the checkered flag alone for its first-ever title in nine races.

Below are the full results from the 64th men’s Little 500: