For about 170 laps or so of the 67th Men’s Little 500 nobody seamed overly eager to make a winning move.

The pace was slowed by multiple cautions. The pack was about 14 teams deep. Everyone seemed content at just riding things out to set the table for what could have been one of the largest sprints the race has seen.

Then Black Key Bulls said enough. Someone had to make a move, so it might as well have been “The People’s Champs.”

“Why would you not try?” said Charlie Hammon post race

BKB broke away from the field with about 25 laps to go and built a straightaway’s worth of lead it never gave up in similar fashion to Kappa Alpha Theta the day before. The common thread between the women’s and men’s champion? Coach Ryan Knapp, who is believed to be the first coach to ever win both races in the same year.

“We were just watching each other waiting for someone to make a move,” BKB rider Kevin Mangel said. “When it happened, it happened.”

Black Key Bulls, from eighth starting spot, won in just less than two hours and 14 minutes time ahead of Gray Goat and Cutters. The two teams on the lower steps of the podium attempted to bridge the gap together late but ultimately didn’t have enough legs to catch up.

“Nobody was pulling through,” Gray Goat rider Thomas Torbik said. “Nobody really wanted to do a lot of the work, and I think that was because there wasn’t really anybody super favored to win the race. I think everyone saved, and nobody took full advantage until the end.”

Gray Goat was one of the pleasant surprises of the race, having moved from 15th starting spot to second. The veteran team featured 11 races of experience.

“I’m just so proud of this team,” Torbik said. “We knew that (BKB) was going to have a decent shot either way if they went for a sprint or pulled out like they did. We just couldn’t hold their wheel for very long.”

BKB’s move was planned well before the start of the race. Hammon said there was a threshold number that they were eying to pounce at and ultimately liked what they saw from the other teams when they made their move.

What helped was that the pack was as bunched together as it was. Loose cinders in Turns 3 and 4 sparked a handful of crashes and stymied any chance of a few teams working together to break into a smaller pack.

That was fine by BKB. Sprint or no sprint, the trophy is still the same.

“There’s no words to describe what it feels like to get that win for them, that win for us,” Hammon said. “It’s a special group.”

The championship is Black Key Bulls’ second in four years. They previously won after surviving a crash of lead riders coming to the white flag in 2014.

There was less drama this go around.

“It’s not just us on the bike, it’s everyone on the team,” Mangel said. “Everyone from all the nine riders to the parents, all the friends, all the family. It’s more than just us four that made this championship.”

As she made her way through Turn 3 on the 100th lap at Bill Armstrong Stadium with a safe lead that wasn’t going away, public address announcer Chuck Crabb’s voice carried over the noise of the crowd.

“That was the last push that I needed there was to hear that,” Bennett said. “It’s kind of unreal. I don’t really know what to say. I can’t really believe it. I can’t believe it.”

Bennett and her Theta teammates broke away from the pack with about 30 laps to go and held off a late effort from Alpha Omicron Pi to win their third Little 500 in the last four years. Delta Gamma finished in third.

“It was a great race,” said Ali Oppel of runner-up finisher Alpha Omicron Pi. “Theta made a move that worked.”

Theta made its winning move with about 30 laps to go when coach Ryan Knapp opted to tell his riders to push the tempo and escape a lead pack of riders that was about 10 teams deep. The theory was that Theta could avoid having to win in a sprint if it could build an insurmountable gap that would die as the race went on.

In fact, she hated it.

“I already apologized to (Knapp) for questioning it because I was worried it wouldn’t stick,” Malcomb said.

The strategy was rewarded with a comfortable race win and ensuing celebration on the cinder track with Theta fans flooding over the fences to celebrate.

“We knew we had the depth to do something like that,” Bennett said. “We didn’t know exactly when we were going to do it or if the opportunity was even going to present itself, but we saw an opportunity and we went for it and we were just able to hold it all the way.”

Alpha Omicron Pi made Theta sweat it out late, bridging the gap from nearly 18 seconds with about 20 laps to go to a bike length with three left on the board. Ultimately, the second-place finishers used up too much energy trying to get back into the race to make a late enough charge.

Even so, the finish was the best in Alpha Omicron Pi’s program history. Theta may have added to its dominant legacy, but AOPi only continued to add layers to what’s been one of the fastest growing Little 500 teams in either the men’s or women’s fields.

“That’s what I’m most proud of is that we’ve got 10 girls on this team that work so hard,” Oppel said. “We’ve built this so far along since I’ve been here.”

Theta, AOPI, Dee Gee and a handful of other top competitors nearly found themselves out of the running after a crash on lap 35 when the lead pack was making its way around a lapped bike.

Nearly 10 teams wound up on the ground just beyond the start finish line, and chaos ensued. Luckily, for the frontrunners, the damage was limited. Riders quickly got back on their bikes, took off and restored a relatively stable pack just about a dozen laps later.

For the champion Thetas, it was Sydney Keaton who fell, got up, rode a few more laps and then handed the bike off to Malcomb from there. She held her composure the whole way.

“She got up like nobody’s business and took off,” Malcomb said of Keaton.

In a race where so many things can go wrong, Theta handled adversity when it came and pushed the right buttons at the right time. It’s sorta what Theta does.

We’ll be updating the grid LIVE as it fills out all day from Bill Armstrong Stadium.

The 2016 Little 500 awards were this past week. Here’s who came away with top individual honors.

END_OF_DOCUMENT_TOKEN_TO_BE_REPLACED

It took several minutes after the race before Phoenix’s Tabitha Sherwood was able to talk to anyone after winning the Little 500 on Friday.

She had given it her everything. And while every rider on the track gave it their everything, too, Sherwood’s everything was the only effort that was enough to come away with victory.

While it ends in joy for Sherwood and her Phoenix teammates, it means pain for those who gave it their all and it just wasn’t quite enough to beat Phoenix.

So when Delta Gamma’s Kristen Bignal came over to congratulate Sherwood, it felt like something special.

“So proud of you,” Bignal said to Sherwood as the two hugged.

“Proud of you!,” Sherwood answered.

END_OF_DOCUMENT_TOKEN_TO_BE_REPLACED

BLOOMINGTON — The fans chanted MVP at him. They hugged him every time he turned around. He kissed the cinders with his best friends. He hoisted his team’s bike. He showed off a new ring. He smiled for pictures with his teammates – and the BorgWarner trophy.

It was exactly how Delta Tau Delta senior Luke Tormoehlen had envisioned it in his head all along.

After popping out of Turn 2 on the final lap of Saturday’s 66th men’s Little 500 at Bill Armstrong Stadium, Tormoehlen jetted around Sigma Alpha Epsilon and then advanced around Black Key Bulls to give the Delts their second Little 500 victory.

“I can’t even put it into words,” Tormoehlen said of what it meant to win in his senior year. “It’s good when a vision comes true. It’s three years of my life revolving around this race, and all of the hard work and dedication toward an ultimate goal paid off.”

END_OF_DOCUMENT_TOKEN_TO_BE_REPLACED

BLOOMINGTON – 3PH Cycling came into this year’s Little 500 wanting to prove they can compete with the field’s best.

Saturday, they did just that.

The second-year team finished in fifth to build on their eighth place finish from a year ago. With 10 laps to go, they were hanging around with eventual winner Delta Tau Delta, Sigma Alpha Epsilon, Black Key Bulls and Cutters before falling off pace in the closing laps to finish just over 24.108 seconds back.

END_OF_DOCUMENT_TOKEN_TO_BE_REPLACED

BLOOMINGTON – All it really takes to ruin a team’s Little 500 is one crash.

Sigma Alpha Epsilon had two, one on lap 28 and then another on lap 102. Both incidents left lead rider Joe Krahulik bloodied and seeking medical attention while his teammates scrambled to make up for lost ground.

The crashes were the type of nightmare situations that take teams completely out of Little 500s, let alone title contention. But even after being knocked down twice, SAE rebounded to finish second behind Delta Tau Delta in one of the more adversity-filled races a team could have.

“It’s hard to be disappointed with everyone’s effort,” said senior rider Andy Krahulik. “To come back from all that, that’s something I’m going to remember forever.”

END_OF_DOCUMENT_TOKEN_TO_BE_REPLACED 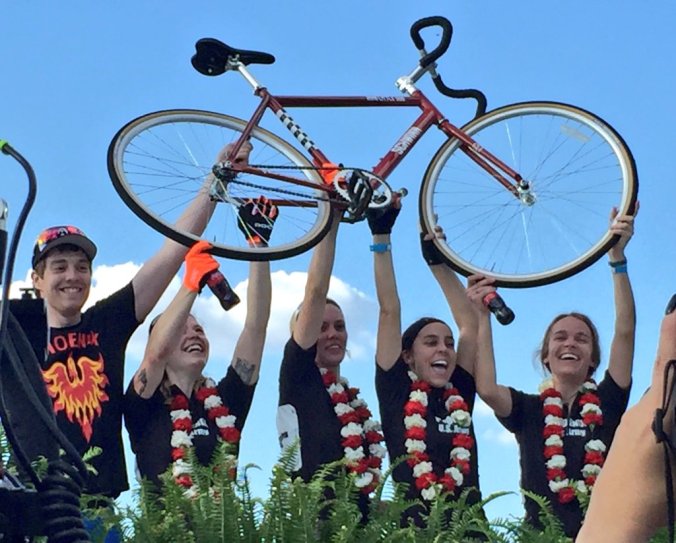 She doesn’t exactly remember how it happened. She doesn’t need to. All that matters is that Sherwood, a fifth-year senior riding in her third and final Little 500, leaves the track at Bill Armstrong Stadium as a champion.

“It took about a second for it to sink in, but I just barely saw that I had her by like a tire width,” Sherwood said of the photo finish. “I felt like I had a little bit more in me. If the starting line was just a little bit further back, I would’ve been fine. But I may have made my move a little bit too late. But I guess it still worked.”

Photo of the margin of victory for @PhoenixCycling1 beating @DeeGeeCycling to the line to win the Women's #Little500 pic.twitter.com/LFlIQwvivh